The creative group 'Man of Action' created the Ben 10 media franchise for production by Cartoon Network Studios. In general, the show is about a boy who gets the Omnitrix, a device that looks like a watch but permits him to change into alien forms. The original program ran from 2005 to 2008, but the spin off Ben 10: Omniverse is still on television. The show inspired the creation of eight video games: Ben 10: Protector of Earth, Ben 10: Alien Force, Ben 10: Alien Force: Vilgax Attacks, Ben 10: Alien Force: The Rise of Hex, Ben 10 Ultimate Alien: Cosmic Destruction, Ben 10: Galactic Racing, Ben 10: Omniverse, and Ben 10: Omniverse 2. The first installment in the video game series, Ben 10: Protector of Earth came out in 2007, released for the PSP, PS2, the Nintendo Wu and the Nintendo DS. When the game opens, a drone takes a lot of the DNA out of the Omnitrix, only leaving Heatblast and Four Arms for Ben. He finds out that the pilfered DNA is helping power and energize several robots, and when he kills those robots, he gets some of the alien forms back. As the game progresses through its six acts, Ben can unlock more alien powers and even the master code, permitting him to stay an alien indefinitely or switching forms without losing Omnitrix energy. After each level, you get a Plumber rank. If you achieve an A rank, you receive a character view, typically a villain or boss. Next came Ben 10: Alien Force, based on the first two seasons of the television show. It came out in October 2008 for the same platforms as the first game. The opening features Ben. Kevin and Gwen running into Forever Knights while they are headed to to the boardwalk for some fun. It turns out that the Forever Knights are looking for a buried piece of alien technology. Ben decides to retrieve the part himself, and he runs into Gorvan, an off-world Tetramand Plumber, who recruits the three to find several illegal components of alien technology. The three find out that Gorvan is actually a rogue Plumber, seeking to round up and sell the illegal technology himself. A rousing battle with the Highbreed rounds the game out. 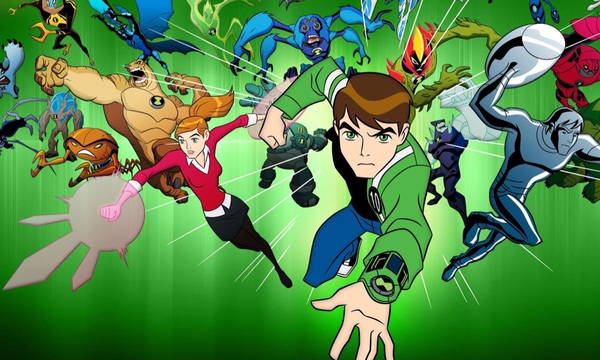 The third game was Ben 10 Alien Force: Vilgax Attacks, based on the final season of the original Ben 10 show. The game was available for XBox 360, Nintendo DS and Wu, the PSP and the PS2. Vilgax launches an invasion of the earth with the Null Void Projector, and Ben. Kevin and Gwen come to the defense of their city. Using space and time travel, the three kids head to the planet Vulpin, which is the home of one of Ben's first aliens, Wildmutt. More renegade alien technology appears to be in production, and the mission is to stop its creation before they make the necessary tools for the invasion. 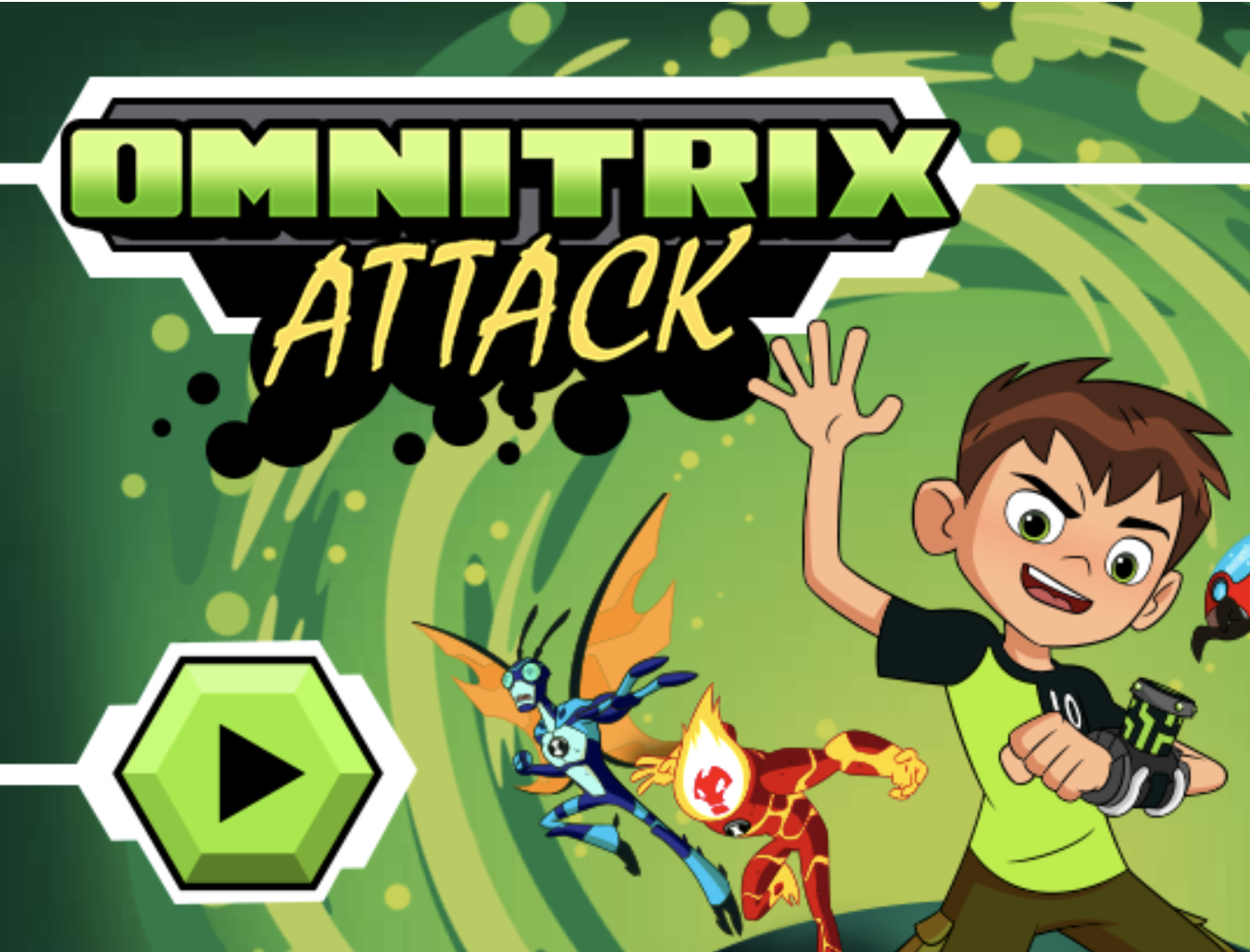 But when he discovers the alien device known as the Omnitrix, he gets the ability to turn into ten different alien heroes. Use the powers of Four Arms, Heatblast, XLR8, Diamondhead, Upgrade, Overflow, Wildvine, Cannonbolt, Stinkfly, and Greymatter to save the day. Play free online games featuring Ben 10 on Cartoon Network!

Next in the series came Ben 10 Alien Force: The Rise of Hex, via WiiWare and the Xbox Live Arcade, as the first downloadable entry in this game series. It came out in 2010. Charmcaster and Hex are trying to bring the Age of Technology to a close, ushering in an age of Magic, with Ben's help. However, Ben ends up shorting out his Omnitrix, leaving only two forms at his disposal, and then he finds out that Hex wants to rule the world. Kevin is missing too, by the way. A series of battles with Techadons, the Charmcaster and Hex all round out the action.

Ben 10 Games are a category of video games that features characters and themes from the Ben 10 TV show. Ben 10 is an American TV series produced by Cartoon Network. Ben 10 Games Best online ben 10 games, free to play. Ben 10: Alien Force is a high quality game that works in all major modern web browsers. This online game is part of the Action, Emulator, Anime, and Nintendo DS gaming categories. Ben 10: Alien Force has 100 likes from 126 user ratings. If you enjoy this game then also play games Bendy and the Ink Machine and Ben 10 Ultimate Alien: Cosmic.

Ben 10: Ultimate Alien was a spin-off of the original Ben 10 series and inspired the fifth game in the series, Ben 10 Ultimate Alien: Cosmic Destruction. It came out in 2011 for Xbox 360, PS2, P53, PSP, and the Nintendo Wu and DS. At the outset, the three heroes are battling some Forever Knights in a catacomb beneath the streets of Rome. At the same time, a cosmic storm is heading toward Earth. Plumber ships attempt to head the storm off, but it ends up that a hostile To'kustar is heading toward Earth to kill Ben, and Null Void creatures are about to invade France. The general quest is to reassemble the Potis Altiare and then fight the To'kustar.Ben 10: Galactic Racing came out in the fall of 2011 for PS3, Xbox 360, Nintendo DS and Wu, PlayStation Vita, and Nintendo 3D5. Rather than another series of events in the long story, this is a racing game involving the characters and alien forms from the game. Players can turn on Ben's alien personas in the middle of the race, as well as using Kevin's special abilities to change the final result. It is possible to pick up Omni-Node Power-Ups that have a lot of different abilities, including the Ultimate move which gives you a huge increase of power and speed. A variety of Galactic Grand Prix circuits host the races. This is the first Ben 10 game permitting the player to take the role of Vilgax.Ben 10: Omniverse is the seventh Ben 10 game and was released for the Wii, Wii U, PS3, Xbox 360, and the Nintendo 3D5 and DS. The evil villain Malware has declared his intentions of destroying the world, and Ben and Rook take him on. Nfl spreadsheet printable. The game offers the option of two-player co-op play as well as individual play.Ben 10: Omniverse 2 came out in 2013 for the Wii, Wu U, PS3, Xbox 360 and the Nintendo 3D5. Set during the Frogs of War, Ben has to take on the Incursions in order to return to Earth. A whole legion of villains, including Attea, Dr. Psychobos, Emperor Milleous, and the Way Bads are all back there wreaking havoc and threatening life as we know it.

The Ben 10 series of shows and video games has attracted a large following. If you enjoy individual-player and co-op adventure games, this is a series that you are likely to enjoy. You can pick up the game in retail locations, although the older ones are harder to find unless you're looking at a secondhand dealer such as GameStop.

However, the Ben 10 games are also available online. If you are interested in Ben 10 games, then take a look at our website. We offer you the chance to buy

We are with you with Ben 10 who placed in our hearts with the different heroes he transformed. Get ready for an adventure with both Fourarms, XLR8, Diamondhead both Ben 10 and the others. Your purpose at the game, saving the country by make a war with the Lord of Bad Vilgax, and his aliens, as always. To start the Ben 10's adventure on twoplayergames.org, press the 'PLAY' and 'START' Buttons to start the game. Let's have a look the game controls: You can use the 'Left, Right and UpArrow Keys'or 'W-A- D' to move and jump Ben 10. Aim with your 'MOUSE' and fire with the 'Left Click'.
Let's give some information about this progressive game: Ben 10 can shoot rapidly; but he has a limit of shooting. You can follow it from the blue indicator which is on the top left corner of the screen. While you are not shooting, it will charge. The energy rank is at the top of this indicator seems green. There are some bonuses in the level to fill the gun and get power. Moreover; in this game Ben 10, doesn't have the ability of transform to the alien without time limits. So, when the indicator on the left bottom corner has finished, you will transform to the shape before. If you access to reach the buttons 'CHECKPOINT', when you die you won't start from the beginning of the game. You will start from the last checkpoint you reach.
During the game you can make on/off the sound of the game with the button on the right top corner of the screen. Let's see can you resist against the Vilgax and his aliens. We wish you success.