It's always fun to predict how the 2018-19 Premier League season will go. OK, maybe it's a bit premature .. but here's our 'way too early' table.

City are simply too far ahead of the rest for anyone to launch a serious challenge next season, although their 19-point winning margin from 2017-18 will be halved. Pep Guardiola will freshen things up with a couple of tweaks, particularly up front in midfield, while Vincent Kompany's entreaty to his teammates to maintain their level of desire will be well heeded. 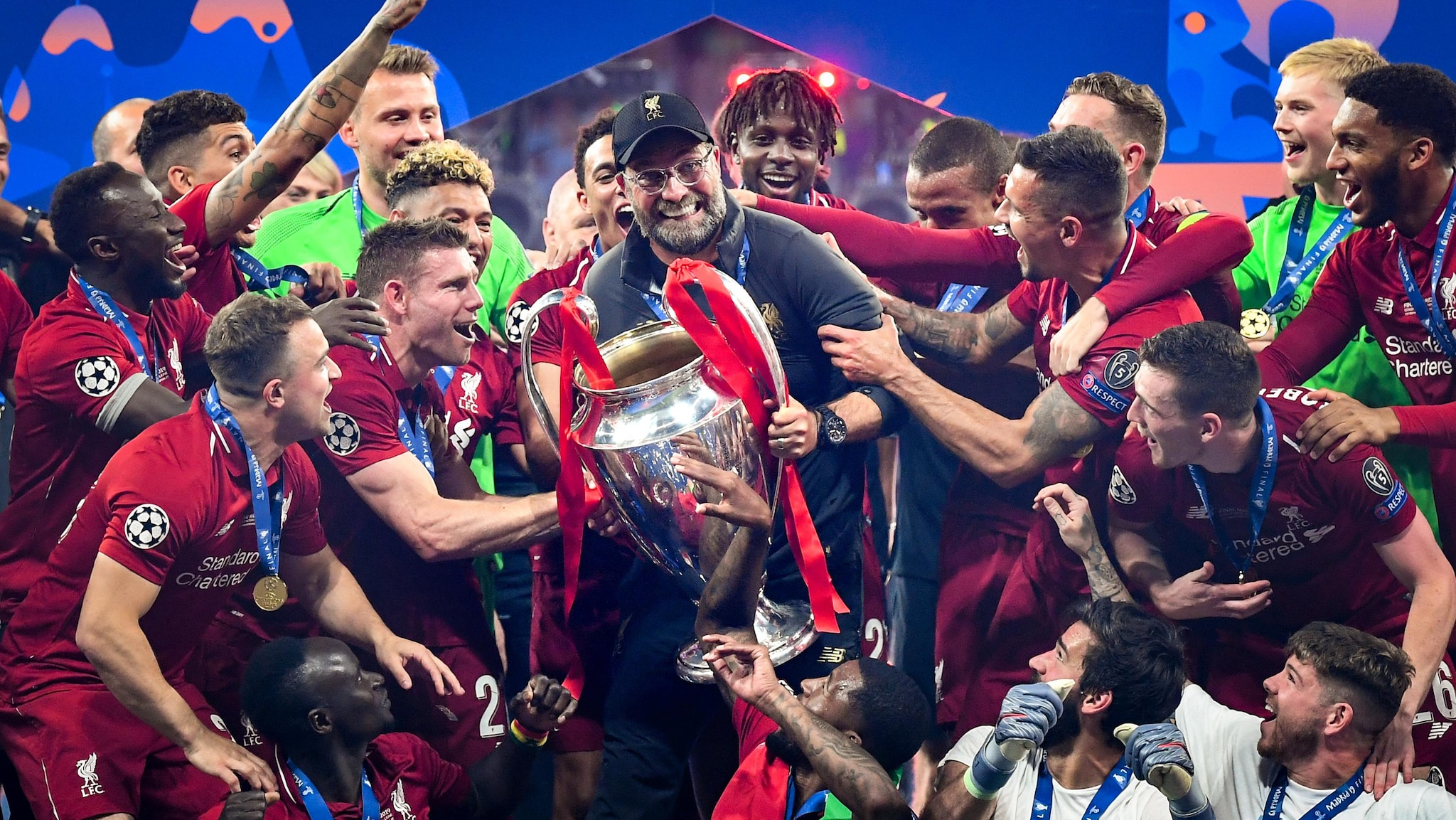 Their Champions League final defeat was a bitter pill to swallow, but Liverpool are on an upward trajectory at the moment. It will not be enough to bother City as the season goes on, but Jurgen Klopp will surely add depth to key positions -- a quality backup to the likes of Mohamed Salah in attack is an obvious need.

Question marks over Tottenham's capacity to compete with the financial millstone of their new stadium hanging over them were reduced slightly by Mauricio Pochettino's signing of a five-year contract. It suggests he has heard the right things from Daniel Levy and Spurs. So buoyed by their homecoming and with added squad depth, Spurs will sit comfortably in the Champions League positions once again.

United and Jose Mourinho have enough quality to see off most opponents, but any progress they made in his first two seasons risks grinding to a halt now. While their rivals play fresh, exciting football, the positive feeling around United's approach is minimal. This will see them slide two places, perhaps paving the way for a change in the dugout next summer.

It will be a transitional season for Arsenal under Unai Emery and one of slight improvement, although they will miss out on the Champions League places again. Emery will instill an organisation and diligence that the Gunners had been missing, and he will hope fans and the board hold their nerve. Though a return to Europe's top table is not on the cards just yet.

It feels like a crossroads for Chelsea, whose method of hiring and firing every couple of years will surely stop bearing fruit one day. Assuming Antonio Conte departs, there will be a huge task for his successor to reshape the squad, and not much time. The Stamford Bridge club could receive a huge reality check.

If Rafa Benitez remains in charge at St James's Park next season, presumably he will have been promised the kind of resources he requires to push Newcastle up a level. Given two or three quality signings, there is no reason why, in a league that lacks an obvious challenger to the established order, he cannot nestle them in beneath the leading pack. As Benitez showed last season with a middling squad, there are few better managers around.

Palace's turnaround under Roy Hodgson in 2017-18 was stunning, and in a Premier League that lacks the kind of calm, considered heads the veteran manager brings, they are a good bet to thrive next time around. That might change if Wilfried Zaha leaves the club where he is so clearly at home, and there is always the riddle of Christian Benteke's toils up front to solve, but Palace look set to be just fine.

Fulham play the kind of football most Premier League clubs beyond the top six have given up trying. They will take anyone on, and that approach will pay dividends with a top-half finish and plenty of acclaim for Slavisa Jokanovic's free-flowing side. Keeping Aleksandar Mitrovic, seemingly unwanted at Newcastle and prolific at Craven Cottage, could be the key.

As with so many of their peers, this feels like a year of change and adaptation for Everton. If Marco Silva is confirmed as their new manager, there will be cause for optimism, although nobody has yet seen him work in the top flight over a full season. New signings are needed, and Ademola Lookman should be integrated quickly after his superb loan spell at RB Leipzig, but most around the club would be happy just to see a better brand of football than under Sam Allardyce for now.

The Manuel Pellegrini revolution begins, although it will take something drastic to turn West Ham -- beset by anger and anxiety both on and off the pitch -- into European contenders straightaway. He should make them easier on the eye, though, and will relish getting the best out of Marko Arnautovic and Manuel Lanzini.

Wolves mean business and are equipped to consolidate themselves in their first season back in the big time. Ruben Neves can be one of the Premier League's best midfielders and they had an early pre-season boost when Willy Boly, their towering centre-back, turned his loan from Porto permanent. They could still do with a top-quality striker, but it is hard to see Nuno Espirito Santo -- with the help of Cristiano Ronaldo's super-agent, Jorge Mendes -- being denied the funds to acquire one.

It will be a season of consolidation for Southampton under Mark Hughes, who will not allow a repeat of last season's near miss but will find rapid progress tough to achieve. Saints need to retain their few stars this summer, in contrast with previous transfer windows, and add some potency in the final third.

Despite frustrations with Claude Puel's relatively conservative approach, there were suggestions in the last two games of 2017-18 that Leicester still pack a punch and cut loose. However, they look sure to lose Riyad Mahrez, and these days, they simply appear to be another member of the mid-table pack.

A tougher year for Burnley and Sean Dyche, who performed to their limit last season and will have the Thursday-Sunday regimen of Europa League fixtures to enjoy if they come through the qualifying rounds. The squad will need bolstering, and it will be a delicate balancing act; Burnley will not be drawn seriously into the relegation battle but will have to be content with treading water for a year.

Chris Hughton thoroughly deserved the plaudits that came his way last season, avoiding relegation with a compact, methodical team that increasingly showed it could cut loose and play a bit. Some added pace at centre-back might be useful, and the time will come when 34-year-old Glenn Murray's goal scoring touch evades him -- but they will be safe again next season.

Bournemouth keep bobbing along, and it was a testament to Eddie Howe, given their early-season struggles in 2017-18, that he steered them as high as 12th. The concern is that Howe's efforts to add to a tight-knit squad have not always been successful; a lack of quality may show through next season, but they will avoid the drop.

Watford's model eschews continuity and it remains to be seen whether Javi Gracia remains at the helm next season. The squad will doubtless be refreshed once more, but it is hard to discern exactly what its style and personality are. This could be a difficult campaign, and Watford are in line to be surprise strugglers towards the bottom.

Huddersfield's against-all-odds survival was heartwarming, but it will take a tremendous effort to achieve the same again. Much will depend on whether hugely sought-after manager David Wagner, who did not exactly nail his colours to the mast after their final game of 2017-18, remains in position, but either way, it is difficult not to see them struggling again.

Guts and belligerence were the raw materials behind Cardiff's outstanding Championship campaign. They have plenty of experience, but there is a dearth of quality and not even the wise old head of Neil Warnock will be able to bridge the gap between the Bluebirds and their competitors.

The kick-off to the 2018/19 Premier League season is only just around the corner and anticipation is at fever pitch after a thrilling World Cup.

We all know that between now and May, there’ll be plenty of twists and turns but how will it all pan out?

Here’s how I’ve predicted things will go this year.

Not the most surprising answer and whilst I don’t think Manchester City will win by as comfortable a margin as they did last season, I still think they’ll end up as champions.

I see Liverpool being City’s closest challengers, whilst Manchester United will prove difficult to beat and in Romelu Lukaku, they have a man who will win them enough games. I have Arsenal in fourth place as I think Pierre-Emerick Aubameyang will lead them to a much better finish than last year.

I just don’t think Cardiff have the quality needed to stay up as I really see them struggling to score goals. I feel the same about Huddersfield too. I also see the consistent changes at Watford finally causing them to be relegated.

Last season, Burnley surprised everybody by claiming a Europa League place. I don’t think Brighton will finish in the top seven but I see them comfortably in the top ten, pushing for a European place.

Having lost out on the Premier League Golden Boot to Mohamed Salah last year, I think Kane will regain it by the end of the 2018/19 campaign with a total of 31 goals.

With Mohamed Salah on one side and Sadio Mane on the other, I think Roberto Firmino will be providing plenty of assists for Liverpool.

He was unlucky not to win it last season but I think Kevin De Bruyne gets recognised as the league’s best player in 2018/19.

He may not be good enough for Germany, but Leroy Sane is a top, top player and I think he’ll have another great season and retain his PFA Young Player of the Season award.

David De Gea won the Golden Gloves last season and I think he’ll do it again. United may not be the most solid team ever, but their set-up does not leave them exposed too much and in De Gea, they have a man who’ll make the saves to ensure plenty of clean sheets.

There are plenty of new faces coming into the league but I think Liverpool’s Alisson will prove himself to be the best acquisition of the summer. Mobile demo slots online. For too long, Liverpool have been let down by their goalkeepers and I think in Alisson, they finally have a ‘keeper they can trust. 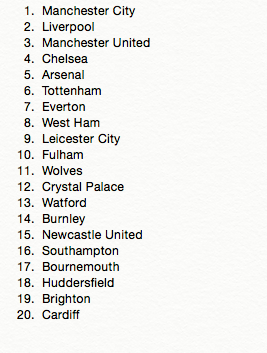 Watford have never been shy to sack a manager and if their season goes as poorly as I think it will, Javi Gracia will be the first man to be shown the door.

How To Cheat The Skill Machine
Okc Thunder Vs Golden State Warriors Live
Comments are closed.