High King Svargrim revealed his alliance with the Gray Host and their plans to unleash a harrowstorm over Solitude. I need to help Svana find a way to stop him.

The Temple of the Divines has been taken

Speak with Svana. She's obviously upset by her father's betrayal, but she says that she needs to act despite her feelings. Suddenly, a soldier runs in, yelling about how the Gray Host is in the city. They've taken the Temple of the Divines and the Tower of the Wolf. Swordthane Uthlet runs off to help, and Svana orders the soldier to calm down and explain himself better. You need to get down to the Temple of the Divines and assess the situation.

Several soldiers lie dead in front of the gates leading to the Temple Courtyard. Swordthane Uthlet is despondent. Svana arrives on the scene and tells him to get it together for the good of the city, and he agrees. Speak with Uthlet, who tells you that the door is barricaded from the other side. The sacred oils are locked inside Castle Dour with the Gray Host. After a bit of talking, the group deduces that there are no witch pikes in the city, and that the Host must have entered through Blackreach. With the help of Blackreach, they could easily hide witch pikes beneath the city. You and your companions must travel to Blackreach and find the ritual site beneath Solitude.

A vampiric bastion beneath the world

The place you're looking for is in Greymoor Cavern, the northernmost section of Blackreach. You can reach it by heading down the Hjaalmarch Great Lift. Your companions have gathered northeast of the Greymoor Keep Wayshrine. The group is looking over the cliff at a massive castle, which Lyris surmises is directly beneath Solitude. Fennorian identifies it as Greymoor Keep. Speak with Lyris, who has been scouting while the group waited for you. Lyris says the ritual site must contain the ritual site. The keep is full of Gray Host soldiers, and as far as she knows, Svargrim and Rada al-Saran are both inside. Lyris suggests that you go on ahead first, as the Gray Host would swarm you if the entire group went in. You can cross the bridge to the main entrance, which is well guarded, or you can enter through the sluice gate in the eastern courtyard, against the eastern wall of the keep. Getting through the gate requires a key.

Your job is to find a way into the inner courtyard and find the keep's side entrance, east of the main stairs. The bridge is closest, but the sluice gate isn't too far. The sluice gate is located north of Bastion Sanguinaris, which lies northeast of your companions' location. Take the bridge if you don't mind fighting, and the sluice gate if you prefer to be stealthy.

If you decide to take the sluice gate, head east once you're inside the walls and enter a fenced-in garden. There, you'll find a Gray Host Coffer containing the Greymoor Keep Inner Courtyard Key. Be careful, the area is patrolled by a Gray Host Bloodknight. Once you have the key, head north and enter the inner courtyard through the sluice gate.

Once you've entered the inner courtyard, head northeast (or just head up the hill and take a right, if you entered through the sluice gate) and enter the keep. Your companions are waiting for you by the keep's side entrance. Fennorian has given Svana two potions to 'throw at danger', should she come across any. He's told her not to shake them, drop them or breathe on them to heard, so they must be quite volatile. The group is splitting up, as the castle is too big for one group to search quickly, and you're running out of time. Fennorian is coming with you to investigate what lies to the west while Lyris and Svana head south.

The ritual has already begun

Not too far into your search, you'll come across a library. Fennorian approaches a book on a podium, which looks important. The notes are in Tzinghalis's handwriting, and it talks about the harrowstorms, the netherroot brew, and how all of that benefits the Gray Host. As it turns out, the tower is a witch pike. All of Greymoor Keep is the ritual site you're looking for. Tzinghalis wrote instructions for placing runes all across the keep.

Enter the Keep's rotunda where you'll meet up with Svana and Lyris. Fennorian informs them of your findings. Suddenly, you hear Svargrim's voice from somewhere out in the hall. When you step on the balcony beyond the short hallway, you'll see Rada al-Saran attuning Svargrim to the harrowstorm, granting the high king control over the storm. Svargrim begins to levitate up the tower, prompting Svana to tell you to follow him.

Head through the eastern gate and enter the central tower. You and Fenn need to go down the stairs; Lyris and Svana will take the side corridor. In the center of the room is a massive Gray Reliquary. Head across the room and take the stairs leading north. The corridor leads upwards, and should take you to Rada al-Saran and the high king. You'll meet up with Lyris and Svana further up the tower. Lyris says that the Gray Host appears to be preparing for war.

The hallway up ahead leads to the central overlook. Here, you'll find Rada al-Saran, channeling a spell inside a red barrier. Speak to him, and see if you can distract him. He has nothing but contempt for you, and insists that you will feel every death when you fail to stop the harrowstorm. After your conversation, he disappears. Fennorian explains that Rada al-Saran was infusing the power flowing through the keep with Svargrim. He and Svana will stay behind and attempt to undo the Ashen Lord's spell while you and Lyris climb the keep to find Svargrim.

Enter the upper corridors and climb up the stairs to Greymoor Keep's Rear Gallery. There are thousands of Stone Husks being kept here. The keep shakes, and the Husks begin to awaken. Head north and escape the Stone Husk Gallery. You'll end up at a dead end. Svana and Fennorian approach from behind you, and inform you that they were unable to stop the attunement spell. Fennorian is going to try to unlock the door. Defend him while he works. A Gray Host Soldier and ravager will attack you first. Then, a Gray Host Nightblade and a Stone Husk. After these enemies have been defeated, three Stone Husks will awaken. Once the three husks are down, Fennorian will unlock the door.

As soon as you enter Greymoor Keep's upper level. The shaking gets worse, and Fennorian realizes that the attunement ritual is almost complete. Lyris notes that the air is starting to taste like copper: the harrowstorm is coming. Svana orders Lyris to take Fennorian while you and Svana keep heading forward. As you move through the halls, you'll hear Rada al-Saran and Svargrim again. The attunement is complete, and the Ashen Lord tells the high king that he's leaving the harrowing of Solitude up to him. Continue climbing; you're almost near the apex of the keep. Greymoor Keep is connected to Castle Dour. Svargrim has ascended to Solitude, and Rada al-Saran appears to be leaving. Lyris initially thought the Gray Host was preparing to attack the city, but now it seems as though they're preparing to move their forces elsewhere. Head towards the surface and enter Castle Dour to confront High King Svargrim.

The harrowstorm is brewing atop the Tower of the Wolf

An army of harrowfiends is being held in the Gray Host's tunnels beneath the castle. The tunnels will take you to the undercroft in the Temple of the Divines. Inside the Temple, there are shrines to all Eight Divines .. except for Arkay, whose shrine has been destroyed and replaced with a statuette of Molag Bal. Exit through the temple's front door.

Lyris and Fenn hold off the harrowfiends

Outside, you'll see two Solitude Soldiers who survived the Gray Host taking the temple. They recognize Svana, but before they can say anything, they evaporate into red harrowstorm energy, which is absorbed by the heart of the storm above the Tower of the Wolf. Your companions convene to form a plan of attack. Lyris and Fennorian are going to deal with the Harrowfiends and make sure they don't escape into the city streets and kill anyone. Meanwhile, you and Svana are going to climb the Tower of the Wolf and confront High King Svargrim. citizens are cowering, trying to hide from the Harrowfiends. Several dogs can be seen running through the streets, barking at the invaders.

Climb up the ramp to the northwest and onto the walls and enter the Tower of the Wolf. High King Svargrim is at the top. He addresses his daughter, claiming that Rada al-Saran has granted him power far greater than Svana can comprehend. He then transforms into a vampire lord. Defeat High King Svargrim. When his health reaches 5%, he will transform into a cloud of red mist and bats, which coalesces in the center of the tower. Use the synergy that appears to toss one of Fennorian's volatile potions at the monster. This forces him into a corporeal form, which Svana destroys. 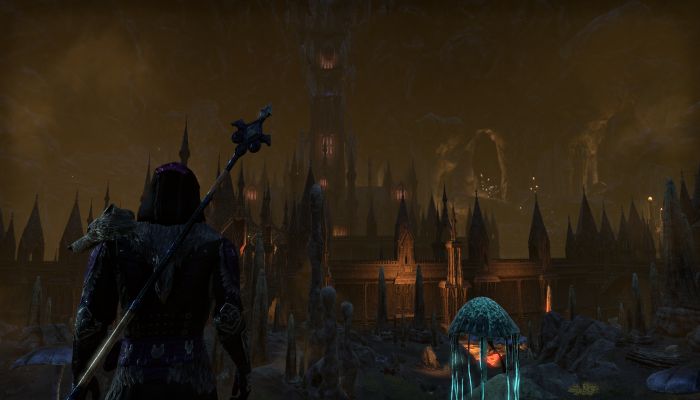 Leave the Tower of the Wolf and talk to Svana about the death of her father. She reflects on what happened, and realizes that her father never cared about his people; he wanted to control all of Skyrim. Rada al-Saran, on the other hand, seemed to want something other than conquest. Svana doesn't know what to make of the Gray Host. She thanks you for your part in saving her kingdom, and rewards you in kind.

'It's done. We killed my father and ended the harrowstorm. The city still stands. Skyrim still stands.
Although the Tower of the Wolf may have been damaged beyond repair.'
Are you all right with all this, Svana?
'No, of course not. My father was the high king of Western Skyrim. I always thought he had the best interests of our holds and our people in his heart.
But there was a darkness there. Jealousy. Bitterness. He wanted to control all of Skyrim.'
So, joining the Gray Host was just about power?
'For Svargrim, yes, I think it was. As for Rada al-Saran and the Gray Host … I'm not entirely sure what they're after.
Enough of this. I need to get to work. With my father gone, someone has to pick up the pieces and restore the holds.'
Is there something you need me to do?
'First, on behalf of Western Skyrim, take this with my thanks. We would have been lost without you. Then rest. Check on our friends. Injuries must be tended to, buildings repaired. Other wounds … will take longer.
We'll have more to do soon enough.'